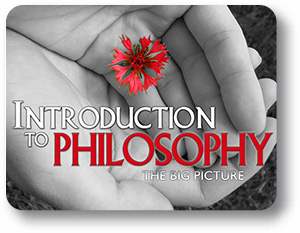 This course will take you on an exciting adventure that covers more than 2500 years. Along the way, you’ll run into some very strange characters. For example, you’ll read about a man who hung out on street corners, barefoot and dirty, pestering everyone he met with questions. You’ll read about another man who climbed inside a stove to think about whether he existed. Despite their odd behavior, these and other philosophers of the Western world are among the most brilliant and influential thinkers of all time. As you read about them, you’ll see where many of the most fundamental ideas of Western civilization came from. You’ll also get a chance to ask yourself some of the same questions these great thinkers pondered. At the end, you’ll have a better understanding of yourself and the world around you, from atoms to outer space and everything in between.

Unit 1: The World of Wonder

Philosophy means love of wisdom. Philosophers seek wisdom by pondering fundamental questions, such as “Who am I?” “What do I really know about the world?” “How should I behave?” The process of trying to answer the questions is more important than the answers. It involves analyzing arguments and using imagination and reason to come up with new ideas. The rewards of philosophy are great. Doing philosophy can help you think and communicate clearly and logically. It can also help you answer some of life’s most basic and important questions. Few other subjects can enrich your life as much as philosophy can.

Unit 2: From Mythology to Philosophy

Western philosophy began in ancient Greece. It developed out of Greek myths about gods and heroes. The myths provided supernatural answers to life’s basic questions. However, after the myths were recorded for the first time, people started to doubt them and to look elsewhere for answers. The earliest philosophers looked to nature for answers and relied on reason instead of belief. They thought that basic substances or natural principles could explain everything in the universe. Their ideas and methods were the beginning not only of Western philosophy but of Western science as well.

The pre-Socratic philosophers of ancient Greece were followed by three of the most important philosophers of all time: Socrates, Plato, and Aristotle. All three lived in Athens, Greece, between 470 and 322 BC, during a time called the classical period. While the pre-Socratic philosophers had focused on nature, Socrates and his student Plato were concerned mainly with human behavior and human society. Plato’s student Aristotle was interested in nature as well as human behavior and society—and in virtually everything else. These three philosophers were among the greatest thinkers of Western civilization, and they influenced the direction of Western philosophy and science for hundreds of years.

Unit 4: Hellenistic Philosophy: How Can Humans Be Happy?

The Hellenistic period of ancient Greece lasted from 323 to 146 BC. During this period, philosophy came to be seen as a practical subject, with the goal of helping people achieve peace of mind and happiness. Four major approaches to philosophy began or became popular during the Hellenistic period: cynicism, Epicureanism, stoicism, and skepticism. The cynics thought that happiness depends only on a life of virtue, which is achieved by having and desiring nothing. The Epicureans believed that happiness comes from seeking pleasure and avoiding pain. The stoics thought that resigning oneself to one’s fate and putting up with hardship is the only way to be happy. The skeptics believed that happiness comes from accepting that nothing can be known for certain and not caring what is true.

Unit 5: Christianity and Philosophy in the Middle Ages

Ancient Greek philosophy remained popular in Europe during the first few centuries AD, when the Roman Empire was at its peak. Then, in the 400s AD, the Roman Empire collapsed, and Christianity spread to dominate Europe. The Catholic Church controlled virtually all thought and learning for the next 1000 years. In fact, it controlled virtually all aspects of people’s lives. During this period, which is known as the Middle Ages, the only philosophers were men of the church. Three of the most influential were Augustine, Anselm, and Thomas Aquinas. All were priests or bishops of the Catholic Church, and all were named saints after their death for their contributions to Christian doctrine. Their religious beliefs influenced the questions they asked and the assumptions they made. Through them, Christianity shaped the course of Western philosophy for a 1000 years.

The period from about 1400 to 1600 in Europe is called the Renaissance. During the Renaissance, philosophy returned to its roots in ancient Greece. Over the two centuries that followed the Renaissance, most European philosophers fell into two opposing camps regarding the correct path to true knowledge. Some philosophers, including René Descartes and Benedict Spinoza, were rationalists. They thought that true knowledge comes from looking inward and using reason to arrive at ideas about the world. Other philosophers, such as John Locke and David Hume, were empiricists. They thought that true knowledge comes from looking outward and using the senses to experience the world. Both approaches converged toward the end of the 1700s with the philosophy of Immanuel Kant, who thought we use both reason and experience to learn about the world.

Several different approaches to philosophy arose in Europe during the 1800s. It all began with the ideas of a German philosopher named Georg Hegel. Hegel developed an extreme version of Kant’s idealism. He had many followers, but other philosophers reacted against him. These other philosophers developed interesting ideas of their own. In Britain, 19th century philosophers took a more practical approach. They focused on what makes people happy.

In the 20th century, philosophers in America and England focused on deciding whether ideas were useful or on analyzing language with logic. In continental Europe, in contrast, philosophers took a psychological approach. They wanted to get inside people’s heads and understand what it means to experience life or just exist. The 20th century also saw two big changes in Western philosophy: the development of the first uniquely American philosophy and the first internationally renowned female philosophers.