Personal Psychology I: The Road to Self-Discovery 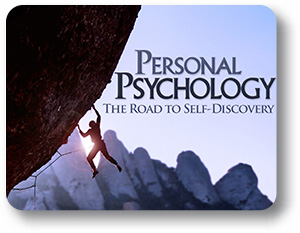 Personal Psychology I: The Road to Self-Discovery

Self-knowledge is the key to self-improvement! Psychology is a subject that can be applied to everyday life. New research and ideas will change the way we view ourselves and each other. This course offers exciting online psychology experiments about our own behavior and how we behave with other people.

The human psyche is fascinating and tremendously complex. Why is it that some people are naturally shy, while others are more outspoken? Why do we sometimes say things “without thinking?” Why do people react the way they do in certain situations? All of these questions (and many more) can be answered through a scientific study of the human mind known as psychology. By studying the details of this compelling field, we give ourselves the tools to better understand our own feelings, reactions, and motivations. And, as a result, we are able to govern ourselves more wisely and develop healthier mental habits. All of this knowledge leads to improved learning, increased engagement, and healthier personal relationships. Psychology is the key to illuminating the shadows of the human mind, and the best way to learn who you really are. Are you ready?

Unit 2: Research and Ethics in Psychology

While the field of psychology seeks to help people through therapy, a large part of its value comes from the theories developed through research and data collection. Using various methodologies, psychologists increase their knowledge about human behavior, consciousness, and emotions by examining case studies and conducting trials. Of course, there are pros and cons to all psychological approaches. The most important thing to remember is how psychology can focus on the scientific process as a way to illuminate the motivations behind human behavior and cognition. In this way, psychology can offer new ways to tackle happiness and understanding to those who suffer from mental illness.

Development of the human psyche is a complex and compelling process with many different phases. From the moment we are born, our minds are continually expanding and making us stronger. This happens in many ways—through the people who care for us and the places we go—but it also follows an innate blueprint of human development that has been studied extensively for a long time. Understanding these processes and how they contribute to our intelligence, compassion, and overall cognition can help us understand both ourselves and the larger world more clearly.

Adolescence is the period of life between childhood and adulthood. It can be a time of “storm and stress” for some, but not necessarily for all young people. During adolescence, teens go through puberty and develop the physical ability to reproduce. They also experience changes in cognitive skills and moral reasoning, often related to an emerging sense of identity and independence. Many teens adopt risk behaviors that jeopardize their health. Depression and eating disorders are relatively common in teens as well, and suicide is the third-leading cause of teen deaths. Several factors—such as having caring relationships with adults and a sense of purpose in life—promote high self-esteem and resilience in adolescents. These traits, in turn, help protect adolescents from engaging in risk behaviors and developing mental health problems.

Adulthood is the period of life between adolescence and death. Most psychologists think that psychological development continues during adulthood. For example, Erik Erikson divided adulthood into three stages, each with a different psychosocial task that people must accomplish to become emotionally healthy and well-adjusted. During young adulthood (ages 19–39), people are physically in the prime of their lives. Young adults face new challenges, such as finishing their schooling and starting full-time work. Many young adults also marry. During middle adulthood (ages 40–65), people start to show some declines in physical abilities, and women lose the ability to have children. Some middle adults have a hard time accepting these changes. During late adulthood (above age 65), people continue to decline in physical abilities and start to decline in cognitive abilities. Facing their own death or the death of a loved one is difficult for virtually everyone. Most people go through five stages of grief as they come to accept these losses.

The nervous system is the body’s control system. It receives and processes information and “tells” the body how to respond. Neurons are the cells of the nervous system. They rapidly send and receive messages called nerve impulses. The brain is the most important organ of the nervous system. It is composed of three major parts: the cerebrum, cerebellum, and brain stem. Each part of the brain has different functions. Scientists learn about the functions of the brain from patients that have had brain injuries or brain surgery, and from brain images such as PET scans. The endocrine system is a communication system like the nervous system. It uses chemical messengers called hormones to communicate with other organs and regulate body functions. The endocrine system is controlled by the hypothalamus, which is part of the brain. The nervous and endocrine systems are the biological basis of psychological traits such as intelligence. Psychologists study twins and adopted children to learn about the influence of heredity and environment on psychological traits.

Sensation is the process of taking in information with the five senses of vision, hearing, taste, smell, and touch. Perception is the process of interpreting this sensory information and is an additional step our brain takes to understand the information we receive from the world. It’s very different from mere sensation. For example, our eyes sense the world as two-dimensional images, but we perceive the world in three dimensions. Optical illusions show that we sometimes perceive sensations incorrectly. We may see things that are not really there. Subliminal messages show that we sometimes fail to perceive sensations entirely. We may not see things that are really there. Many people believe in extrasensory perception, or the ability to perceive with a sixth, unknown sense. However, extrasensory perception has never been proven to exist.