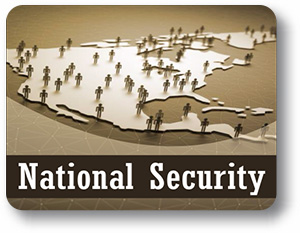 Do you know what it takes to keep an entire nation safe? Not only does this effort require knowledge on how to handle disasters, but it demands a cool head and tremendous leadership abilities. In National Security, you will have the opportunity to learn about the critical elements of the job, such as evaluating satellite information, analyzing training procedures, assessing military engagement, preparing intelligence reports, coordinating information with other security agencies, and applying appropriate actions to various threats. Put yourself in the position of the country’s decisive leaders and develop your own knowledge base and skill set necessary to meet the requirements of our nation’s most demanding career.

Throughout recent decades, there has been a shift in America from a culture where terms like “national security” were not well known to a country so concerned with security that political campaigns are now won and lost based on border defense strategies. We’ll trace the development of national security in the United States, from the beginning of an idea to the thriving and huge Department of Homeland Security. You’ll learn the ins and outs of U.S. homeland security strategy, understand the agencies that oversee the response we have come to expect during disasters and emergencies, and identify the attitudes that drive the theories surrounding one of the most important issues of our time.

Unit 2: Rules of Engagement in the National Security World

Learning how to deal with disagreements is one of the most important parts of learning how to be a person living in the world. Not all people agree with you or share your beliefs or even think they need to obey the law. The world is no different. Imagine how complicated it is to maintain peace among more than 190 countries, and you can better understand the struggle of maintaining international security. One of the most important parts of a healthy international security policy is the relationships we develop and maintain with other countries. It is therefore crucial to learn about international organizations and rules that govern keeping borders and countries secure, how the world navigates complicated issues to keep the peace, the rules of engagement that control the way nations fight when other options fail, and how the United States works within those limits.

Nothing about life is simple, and national security is certainly no exception. While international law and constitutional protections seem clear cut, they are much less easily applied when safety and security are at stake. Since the terrorist attacks on September 11, 2001, three areas have demonstrated how complicated it is to ethically apply laws and national security policies in the United States: the detainment of potential terrorists at Guantanamo Bay, the methods used by the government to interrogate those suspects, and the way the government gathered and used private communications to screen for potential terrorists. In this unit, you’ll get the opportunity to decide whether laws and protections have been applied fairly and ethically to issues such as interrogation procedures and detention for potential terrorists, as well as privacy in communication for citizens and non-citizens alike.

Information is power. This old adage is especially true in regard to the national security world, where, ideally, the right information can prevent disaster from occurring. Get ready for your own intelligence briefing as we explore what intelligence is and how it is collected, learn the difference between SIGNINT and HUMINT, and discover how organizations such as the Central Intelligence Agency (CIA), the Federal Bureau of Investigation (FBI), and the National Security Agency (NSA), among others, work every day behind the scenes to keep America safe.

When do you feel most confident and safe? If you think about it, it’s likely when the rest of your world is stable. It’s hard to handle something challenging, or to feel secure enough to do something daring, when the most basic elements of your life have been upended. The same is true for nearly everyone, and natural disasters can quickly throw everything you know into upheaval. An essential part of the United States’ national security strategy is to quickly respond to those disasters and to restore essential systems and services so that life can continue as it once did. Understanding how that process works helps put into perspective how all of the parts of a national security strategy work together to create a safe, stable country.

We’ve seen what natural disasters can do, bringing a powerful punch to populations that are often unprepared for their fury and intensity. But when you think of disasters, do you also think about those caused by people? In 2015, of the 353 catastrophic events worldwide, 155 of them were the result of human activity. Some of the most powerful threats to the United States come not from the weather but from people. Human-made disasters, whether environmental, industrial, or humanitarian, can have the same devastating power to destroy lives and communities that massive storms or wildfires have. To keep a community safe, a national security strategy must include a way to prepare for, and ideally prevent, the human-made events that can harm families, cities, and even nations.

According to Federal Bureau of Investigation (FBI) officials, the United States is at the greatest threat level from terrorist groups since September 11, 2001. No doubt, the way we live, work, play, and think about national security changed when four planes were hijacked and crashed into the World Trade Center, the Pentagon, and a field in Pennsylvania. But now, more than 15 years later, what does a national security strategy against terrorism look like? What does it entail, and is a single-minded focus on groups like al-Qaeda and ISIS effective?

Unit 8: Predicting and Preparing for the Future

Simply buying a car doesn’t make you a good driver and neither does deciding when and where you’ll drive. Mapping out your route, putting in enough gas, even checking the oil and fluids are all a part of the process, but they don’t work independently of one another to make the trip a safe and pleasant one. What does? Getting out on the road and practicing your skills. The same is true of any national security strategy and the agencies that work to implement those strategies. While some agencies may have the opportunity to practice their skills on a daily basis as they intercept intelligence, keep borders safe, screen passengers and luggage, and gather leads for investigations, other agencies are not offered that opportunity until the worst-case scenario happens. To create a safe, secure nation, those involved in the process not only need a clear plan but also require the opportunity to practice those plans together so that when the time comes to implement them, everyone is ready.