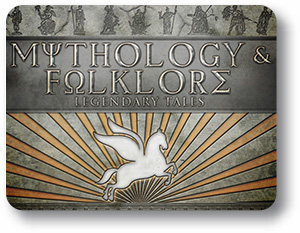 Mighty heroes! Angry gods and goddesses! Cunning animals! Mythology and folklore have been used since the first people gathered around the fire as a way to make sense of humankind and our world. This course focuses on the many myths and legends woven into cultures around the world. Starting with an overview of mythology and the many kinds of folklore, the student will journey with ancient heroes as they slay dragons and outwit the gods, follow fearless warrior women into battle and watch as clever animals outwit those stronger than themselves. They will explore the universality and social significance of myths and folklore, and see how they are still used to shape society today.

Note: This course is not designed for ELL (English Language Learners) students. ELL students may enroll in this course ONLY if they have adequate mentor support at their home school and are able to fulfill all course requirements.

Since prehistoric times, people have passed important stories down from generation to generation. Although cultures differed significantly throughout history, many of these oral traditions are similar. In fact, did you know that for most of the gods in Greek mythology, there are corresponding gods in Roman mythology, along with striking similarities in the stories? As time moved from prehistory (before writing) into history (the written age), these stories were written down so that others could learn from them and enjoy them. All of these stories—myths, legends, folktales, and fairy tales—serve a distinct purpose in the literature of the world.

Throughout the ages, women have often been at the forefront of battles, fighting to protect their people, land, and way of life. These women warriors have been historically viewed as strong, proud women with unfailing courage. The tradition of women warriors is deeply rooted in ancient Greek, Celtic, and Norse mythology. This unit is organized so that you will be able to easily compare mythological warrior women with those from history. First, you will learn about the characteristics of women warriors in mythology and folklore. Next, you will read about the Amazons (mythological, then historical), then about Celtic goddesses and a warrior queen from the first century A.D. You will also learn of the deeds of Valkyries, the Norse warrior-goddesses, as well as a Norse warrior woman from around the year 1000. Finally, you will consider the effects of these on women in ancient societies.

Unit 3: The Heroic Monomyth in Mythology and Folklore

Since the beginning of time, humans have told stories of heroes around the hearth or camp fire at night. While each story is unique, it is also universal in its ability to speak to humankind and the need for a brave hero or heroine who embodies the ideals that define society. We need to believe we can take on something bigger than ourselves and win, and that good ultimately triumphs over evil. As we study the heroic monomyth, you will learn exactly what sets a hero apart from the rest of humanity. You will follow heroes on each leg of their journeys, and learn to differentiate between the types of stories used to tell of their brave deeds.

Unit 4: The Roles of Animals

Animals have walked the earth since the dawn of time, and they have been woven into the human experience throughout the ages. Animals, both real and mythical, are an integral part of myths and legends from around the world. They play many different roles in literature. Animals may be gods or heroes, faithful companions or terrifying monsters. Sometimes they help humans succeed in a quest, and other times they act as clever tricksters and attempt to sabotage it. Often in myths and legends, the line between animals and people becomes blurred and one takes on the characteristics of the other. In this unit, you will explore the role of animals in myths and legends.

The myths and legends of a society are often the cornerstone on which its culture is built. Most cultural activities and beliefs can be traced back to a society’s stories. Myths and legends provide a basis for moral boundaries and establish the basic guidelines for the way people within a society live. As you learn about myths from around the world, you will find that many cultures have similar stories. These common threads can be traced back to a time before people migrated to the far corners of the globe. In this unit, you will learn how myths and legends link the past with the present and provide continuity from ancient times to the modern. You will discover why we need them and how they shape the world around us.

Unit 6: Myths of the World

Almost every ancient culture had a pantheon of gods and goddesses as the cornerstone of their mythology. In this unit, you will study the themes early cultures built their mythology upon, and learn the characteristics of various gods and goddesses. You will also explore the cultural effects of mythological systems and see how they compare. You will see how myths influenced architecture, and you will learn what kind of places of worship various cultures built for their deities.

While every culture has its own unique myths and legends, certain themes show up in almost every culture, from isolated tribes in the jungles of the Amazon to the great civilizations in Europe and even to the scattered islands of the Pacific Ocean. In this unit, you will learn about the similarities of these worldwide myths and legends, and you will search for the historical facts behind them. You will learn how the need for humans to provide a sense of balance to their world lends a degree of commonality to their stories, even when cultures are completely different. Finally, you will look at how the myths and legends surrounding sacred objects can be found in all lands.

We often think of myths and legends as stories from long ago, but they can still be found in many different forms in our world today. Modern myths and legends have been renamed urban legends, but they are just as culturally important as legends of long ago. In this unit, you will learn the purpose behind urban legends. You will find out which superstitions are still alive and well. Was that a black cat that just walked by? You will join the search for animals of modern myth and long-lost cities. Finally, you will decide if there the legends associated with mystical places like the Bermuda Triangle are true or nothing more than modern legends.