Music Appreciation: The Enjoyment of Listening 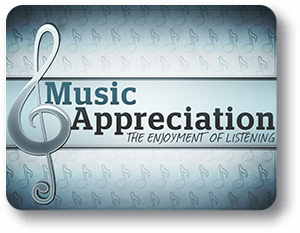 Music Appreciation: The Enjoyment of Listening

Music is part of everyday lives and reflects the spirit of our human condition. To know and understand music, we distinguish and identify cultures on local and global levels. This course will provide students with an aesthetic and historical perspective of music, covering a variety of styles and developments from the Middle Ages through the Twentieth First Century. Students will acquire basic knowledge and listening skills, making future music experiences more informed and satisfying.

Unit 1: The Elements of Music

Music is all around us. We hear it as we shop, while we drive, or even at sporting events. We attend concerts and download songs that we can listen to anywhere, through our phone or mp3 player. Yet, despite having music surround us, how often do we stop to consider how this music is made? Together, we will consider some of the basic elements of music and how they are used in different genres of music. We will discuss pitch, rhythm, dynamics, melody, and form. These elements, when combined create the music that we hear and play. Composers often aim to use them in unique and interesting ways to create original pieces of music.

Since the mid-twentieth century, pop music has been associated with youth culture. Since the advent of rock and roll in the 1950s and the gradual separation of rock and pop music, young people have flocked to popular artists, spending billions of dollars on recordings, concert tickets, and merchandise. In this unit, we will discuss the development of pop music. Specifically, we’ll learn how pop music built on the musical genres that came before it and how technological innovations influenced the development of pop music.

While we may never know what the first music sounded like, we do know that music has played a role in human history for thousands of years. This unit will focus on what we know about the earliest classical music in the Western world, from the prehistorical music of ancient cultures to the chants and masses popular during the Medieval period. It will include a discussion on the types of instruments that composers used as well as the role of music in these early societies.

In this unit, we will learn about the music of the Renaissance. The Renaissance in Europe was a time of great discovery and creation across all artistic disciplines, and this was reflected in the music of the time. Music and society influenced each other in a number of complex ways, from the invention of the printing press which allowed music to be more widely disseminated, to the increasing popularity of dancing and instrumental music. A number of instruments were created during this time that would eventually be used in the musical forms that we are familiar with today.

The Baroque period left a lasting impression on Western music. From about 1600 to 1750, composers altered musical notation, established opera as a unique genre, and expanded instrumental performance. In general, Baroque was much more highly ornamented than ancient, Medieval, or Renaissance music.

The Classical era of music history was fairly short-lived, spanning just 80 years from 1750-1830. However, the developments that took place during these years influenced Western music possibly more than in any other era. Often lighter and less complex than music from the Baroque period, music from the Classical era features frequent changes in mood and an emphasis on instrumental music. Much of the classical music you might hear today comes from this period. This unit will focus on the Classical era of music and the composers who changed the world through their music during these years.

During the 1800s, the Romantic period saw the development, of many of the modern forms of music we still listen to today. This unit will focus on the Romantic period in music. We will meet composers like Johannes Brahms, Franz Liszt, and Pyotr Ilyich Tchaikovsky, and will explore the ways that their music sounded different from anything that had come before. We will study the effect of increasingly large orchestras on the music composed during this period, as well as the increased importance of music performance and concerts.

During the early twentieth century, jazz evolved as a distinctly American musical style inspired by musical traditions from both Africa and Western Classical music. One of the key features of this musical style is improvisation. In this unit, we will discuss the development and influence of jazz. We will learn about some of the jazz musicians who helped to develop this form of music.

Investigate the musical traditions that combined in jazz.

Discuss the characteristics and features of jazz music.

Examine improvisation and its role in jazz music.

Learn about some of the musicians who helped to develop jazz.

Trace the development of jazz during the twentieth century.