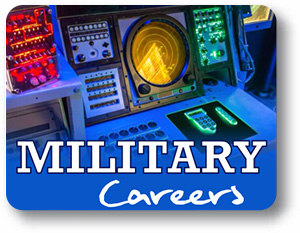 You’ve probably seen an old movie about a hotshot naval aviator, or perhaps a more recent film about the daring actions of Special Forces operatives. But do you really know what careers the military can offer you? Introduction to Military Careers will provide the answers. The military is far more diverse and offers many more career opportunities and tracks than most people imagine. In Introduction to Military Careers, you’ll learn not only about the four branches of the military (and the Coast Guard) but also about the types of jobs you might pursue in each branch. From aviation to medicine, law enforcement to dentistry, the military can be an outstanding place to pursue your dreams.

Unit 1: Welcome to the Military

You may have dreams of accomplishing an epic flyby as the best of the best naval aviators; becoming an elite member of a Special Forces unit so you can take down the world’s most dangerous terrorists; or becoming the first person to walk on Mars successfully. The military is certainly the place to fulfill these dreams. But what do you really know about the 12 service branches of the United States military? In this unit, we’ll examine the two types of military service, discuss the different branches and their unique missions, and highlight some of the historical successes and unsung heroism of each. By the end of this unit, you will definitely have a better sense of not only the differences amongst each military branch, but also which one sounds like a good fit for yo

If you’ve seen that famous movie featuring confident naval fighter pilots fighting for first place over the desert skies of California, you may think you know what military aviation is like: the roar of a jet, the breathless landings on an aircraft carrier in the middle of a midnight-blue sea, the swagger of a pilot who has just seemed to defy gravity with ease, the heroic efforts to defend a border or rescue a stranded vessel off of an enemy coast. You’re not wrong, but this picture of aviation is just one part of this incredibly demanding yet adventurous and competitive career path. In this unit, you’ll learn about the opportunities available in aviation, across the branches, and the many different talents that each job requires.

Have you ever seen a caravan of large military trucks heading down the highway? It’s an impressive sight whenever you see the military on the move. More than likely what you saw was a small snapshot of the logistics and transportation division of the military when it’s on the move. Though they get very little attention—as in most people don’t think about them at all—careers in these fields are the backbone of the working military. Whether responsible for planning and analyzing potential needs, stocking and restocking supplies for soldiers, or getting those supplies to the people who need them most, these jobs literally and figuratively support the troops in the most important way possible. These are the unsung heroes of the military.

You might imagine a military law career to be a lot like a civilian legal career. To a certain degree, it is. Crimes and punishable offenses are dealt with by the police and perpetrators are forwarded for trial. But that’s about where the similarities end. The military legal system and its career track have their own unique language, set of laws, and punishments. In this unit, you’ll learn about the two types of career tracks, along with the jobs that people do in each, as well as the legal world of the military. In the process, you’ll understand the kind of people who may be attracted to a career in military law.

The military is a huge organization full of careers of every type. Every military base is more like a large city than a small business. Though you can find doctors, lawyers, dentists, human resource specialists, accountants, chefs, and child care specialists within the military, the military has one purpose: to be ready to win battles. That challenge is a serious one, and it requires an enormous amount of expertise and training. The careers that focus on combat operations, then, are the heart of the military’s mission: to defend our interests, our borders, and our citizens. People in these careers are the workers who are ready to respond at a moment’s notice, who are well trained in battlefield tactics, and who can perform the essential jobs needed to defeat the enemy and bring soldiers home safely. These are the careers of those who face danger and do not flinch. If every soldier is a hero, those in combat operations are the superheroes.

Think about some of the smartest people you know. They are usually the people who are always coming up with new ideas; who can speak multiple languages; can crack an entire crossword puzzle faster than you can figure out 17 down; or people who can take something apart, fix it, and put it back together without looking at a single instructional manual. These wizards of technology, engineering, and intelligence are the people who keep the military humming from the inside out and manage to fix almost anything just in the nick of time. Every career in every branch of the military requires intelligence and passion. These jobs, however, require a special set of skills that may be the perfect description of your strengths and talents. If they are, you most certainly will have a home here.

Unit 7: Military Behind the Scenes

In The Wizard of Oz, Dorothy is surprised to learn that the magnificent Wizard is actually a regular man hiding behind a curtain with a pretty impressive set of machinery. It’s a surprise that has created the saying “the man behind the curtain,” implying that sometimes the big show is actually happening behind the scenes. It’s no different in the military, mostly because so many of the important careers in the military are the ones that no one pays much attention to. In this unit, we’ll pull back the curtain on some of these careers. We’ll focus on business and finance, public affairs, music, chaplain services, and food services, showing you both what they do and why they are so crucial to the success of the United States Armed Forces.

When you think of military medical care, do you picture a cot in a dusty tent with only some gauze to treat a wound? Patching someone up in the back of a Humvee while it screams across a battlefield? For combat medics, that picture may be more true than not.But military medical services are far more sophisticated than you may imagine.Military medical care spans basic preventive care to combat medicine, to dietetics, to research-driven roles in the lab, all with one goal: improve the lives of soldiers and their families.In this unit, you’ll learn about the different facets of military medical care and how the military combines these facets to serve soldiers, veterans, dependents, and the global community as a whole.