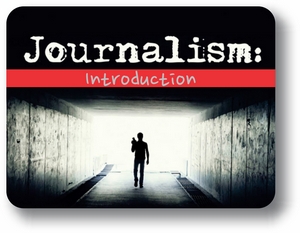 Are you a storyteller at heart? Are you always the first one to know what’s going on at school or in your town and excited to share the latest breaking news? If so, you are the kind of person every online, print, and broadcast news outlet is searching, and Journalism Semester 1: Introduction is the perfect course for you! Explore the history of journalism and see how social media and the digital world has changed the way news media operates. Learn the basics of press law as well as the code of ethics journalists should follow. Finally, understand how to make your writing and speaking more powerful, and discover the importance of pictures and images when telling a story.

Unit 1: The History of American Journalism

In this unit, you will learn about the changes in American journalism between the end of the 19th century and the beginning of the 21st and how advancements in technology helped speed these changes along. Focusing on key figures and events in American history, this unit will help you see the connection between each generation of journalism, from print to radio to television to digital. You’ll see how everyone from William Randolph Hearst to Jon Stewart has changed the way we understand news—and how you, as reader and citizen, participate in it.

In this unit, you’ll learn about how the Internet and the digital world we now live in has changed how the four major types of news media—newspapers, magazines, radio, and television—do their primary work. We’ll first examine the focus of each medium, identifying how journalists tell their stories and what the focus of each medium is.We’ll also discuss interesting figures and events within the newspaper, magazine, radio, and television worlds to demonstrate how the genre’s focus is reflected. Then we will discuss how each of these traditional types of news media has been absolutely transformed by the digital world.

Being a member of the press comes with serious responsibilities. It’s not enough to tell a great story—journalists are also responsible for following the law, both international and American. But more than that, everything a journalist does should follow a set of ethics that goes beyond the law. In this unit, you’ll learn the important basics of press law and its history, the code of ethics journalists should follow, and a few cases of journalists who have gone very wrong. By the end of this unit, you’ll understand not only what a journalist can’t do but also what every journalist should strive to do every day.

Every journalist is a storyteller, and those stories have a structure. Understanding how to be the best journalist possible is more than just knowing the facts or finding a great person to interview—it’s about understanding how to know your audience and speak directly to them. In this unit, you’ll learn about rhetoric, or the act of speaking or writing, and more about the three key parts of that act: the author/speaker, the subject, and the audience. By the end of this unit, you’ll understand how you can make your writing and speaking more powerful, in journalism or other media, by understanding your role within the rhetorical triangle.

If you live an online life, as most of us do, you’re probably more likely to respond to a picture than to words. Whether you are on Facebook or Twitter or someone’s blog or a newspaper’s website, when you see an interesting picture, you’ll stop and “read” it much faster than if that story were told in words.

The field of journalism is constantly evolving. While one time journalists all followed a similar path where they started as a “cub” reporter for a newspaper and worked their way up to get their own beat, there are now many more options. Not every journalist will end up working on a staff at a newspaper or magazine, even if they start out at one of these media outlets. Thanks to technology that allows people to work from anywhere at any time, some journalists will choose to venture out on their own to freelance. In this unit, we’ll look at what it takes to be a freelance journalist and how to make a pitch.

In the past, watching a documentary often meant viewing a stuffy, boring video with sleep-inducing voiceover done by a monotone narrator. But in this genre of non-fiction, fact-filled movies capture or document an event, a person’s life, or everyday reality. What could be more exciting than real life? That’s thrilling stuff! As we’ll learn in this unit, thanks to advances in technology and distribution, documentary filmmakers now are making captivating, thought-provoking movies that rival narrative cinematic films — and they are often even debuting on the big screen. By the end of the unit, we’ll have explored the various types of documentaries, reviewed the work of several famous documentarians, and learned some of the essential steps for making a documentary film.

Pretty much everyone carries a camera in their pocket today. That means that anything that happens can, and will, be captured as a photo or video. And with an estimated 244 million Americans using social media in 2018, they won’t be keeping it to themselves. Think of what might have happened if, back in November 1963, Abraham Zapruder had instantly been able to see the film he captured of President John F. Kennedy being shot and share it with millions of people within minutes. The Zapruder film is one of the earliest examples of citizen journalism.  That’s when regular people report or spread news, often based on a firsthand, eyewitness account. If you think back to significant events over the past few years—school shootings, wildfires and floods, terrorist attacks, or sports upsets—it’s likely that the news first broke on social media with reporting by a citizen journalist.