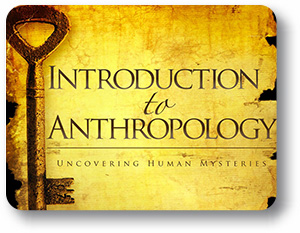 The aim of anthropology is to use a broad approach to gain an understanding of our past, present, future and address the problems humans face in biological, social and cultural life. This course will explore the evolution, similarity and diversity of humankind through time. It will look at how we have evolved from a biologically and culturally weak species to one that has the ability to cause catastrophic change Exciting online video journeys to different areas of the world will also be presented in the course.

Unit 1: Studying Humans: What Anthropologists Do

What do all human beings have in common? Why do some cultures value outspoken people while others admire those who are thoughtful and contemplative? Do teenagers drive their parents nuts in every society? These are the kinds of questions an anthropologist seeks to answer. Anthropology is most concerned with questions about humanity and the kinds of cultures that it creates. To get answers, anthropologists will look everywhere from the earliest prehistoric societies to today’s complex multicultural world. By understanding what we have in common with cultures that are very different from our own, we can better live together in an increasingly global and diverse society.

Unit 2: Human Evolution: How We Got Here

Evolution is a change in a population’s traits over time. As populations become better adapted to their environments, new species evolve. Natural selection is the major process that drives evolution. Fossils and other evidence show how evolution has occurred. The earliest human ancestors evolved about 6 million years ago. The first members of our genus appeared about 2.5 million years ago. Called Homo habilis, they were the first human ancestors known to make tools. They were followed by Homo erectus around 1.8 million years ago. Homo erectus was the first human ancestor to live in cool climates and use fire, but fully modern humans did not appear until about 200,000 years ago. There are still a lot of mysteries about how humans evolved for biological anthropologists to consider. Humans are also part of the larger family of primates, so there is much we can learn from them as well.

Unit 3: Looking at Culture in Context

How do anthropologists learn about human culture? Like all social scientists, they have a specific methodology that they use, including living among other cultures to get to know them well. Everyone’s got to eat, so how a culture acquires food is one of the most basic ways of classifying cultures, and can tell you a lot more than what’s for dinner! Food production and diet are just one part of the interwoven elements that make up culture.

Culture is the entire way of life of a group of people. All human cultures have similarities, called cultural universals. Culture includes the goods people make, the ways people organize themselves and interact with one another, what they believe and value, and the art they create. Language is the single most important component of culture because much of the rest of culture is shared through language. Human language has several traits that make it different from nonhuman animal communication. Language is not just a powerful means of communication. It also influences how we think.

Unit 5: All Environment and Culture

Do you live close to neighbors in a bustling city or out in the country on a rural farm? Do you have to worry about earthquakes or are hurricanes a bigger danger? The answers to these questions reveal not only where you live, but provide some insight into your culture. Population and its location will shape a lot of factors in your life, and anthropologists will focus on their influence. They are also going to need to know a bit about geography and the environments that host the communities that they study. Whether considering isolated cultures that keep to themselves or multicultural urban areas, geography will play an important role.

Archaeology is the study of past cultures through the material remains that people have left behind. Archaeologists find and excavate sites that people once occupied. From objects that people made and other evidence, they reconstruct how people lived, the problems they faced, and how they used culture to solve them. Material remains are the only way to learn about much of our past. This is because there are no written records of what happened during most of human existence. Writing was a recent invention, and even after writing was invented, the lives of ordinary people were usually not recorded. However, the objects they left behind tell us a lot about what they believed and the issues that their society faced.

Unit 7: Religion: What We Believe

Religion is one of the universals of human culture. It may be defined as a set of beliefs and practices that relate to the supernatural, or things outside of nature. Religion serves important purposes, such as explaining the unknown and helping people cope with stressful events. Major world religions include Christianity and Islam. There are also hundreds of local, or folk, religions. Most religions share certain things in common, including myths, supernatural beings, religious practices such as rituals, and ideas about right and wrong. Most religions also identify people that play special religious roles. Like other aspects of culture, religion can change. This occurs most often when societies are under great stress.

Unit 8: Family Ties & Social Bonds: What Keeps Us Together

In all human cultures, family members share special biological and social bonds. A family usually begins with marriage. Marriage occurs in all human cultures, but how people choose marriage partners and how many spouses they can have vary from one culture to another. After people marry, they usually set up a household, which is the basic economic and social unit of society. Family ties, known as kinship, will do a lot to determine who lives in the household. Each society will define kinship a little differently, but families are a core social unit that are designed to help people thrive. Governments serve a similar function. Although they are arranged differently in each culture, they share the goal of serving the needs of their society.

Any culture can be examined through an anthropological lens, even the United States. Like most complex societies, there are many ways in which enculturation occurs. Beyond family and community, enculturation also comes from media outlets. As you have probably noticed, there are a lot of different perspectives presented in the press. Sometimes it is hard to tell what is fact and what is opinion; fortunately, there are ways to distinguish the two. American culture is also complex because of the numerous immigrant groups who have joined this country, adding their own culture to this eclectic mix. Social change also comes from within as social mobility allows people to improve their status, or drop if times are hard. No matter what aspect of American culture an anthropologist explores, it’s going to be complicated!

As the world develops and changes, so does the role of anthropologists. Many anthropologists will focus on current issues, looking at events that destroy cultures, such as war and genocide, and the events that bring cultures together, like treaties. The 20th and early 21st centuries have seen their share of conflicts, but also some significant strides towards finding common ground.