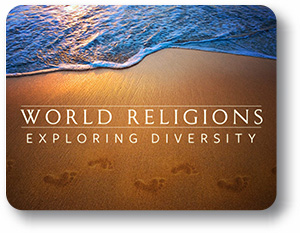 Throughout the ages, religions from around the world have shaped the political, social, and cultural aspects of societies. This course focuses on the major religions that have played a role in human history, including Buddhism, Christianity, Confucianism, Hinduism, Islam, Judaism, Shintoism, and Taosim. Students will trace the major developments in these religions and explore their relationships with social institutions and culture. The course will also discuss some of the similarities and differences among the major religions and examine the connections and influences they have.

Unit 1: The Study of World Religions

What is religion? What purposes does religion serve? Throughout history, religion has played an important role in shaping the ways that humans understand the world around them and in the organization of different societies. Together, we’ll examine what religion is and its role in the world. We will also consider different definitions, some common aspects that can be seen in various religions and some of the explanations offered to explain the development of religion.

Hinduism is one of the most popular religions in the world, and yet it is one of the hardest to describe because it is also an ancient religion and therefore has had a long time to undergo changes and adapt to societies and contexts. There are several denominations of Hinduism, several sacred texts, and several paths adherents can take to reach the ultimate freedom that they seek. To step into an understanding of Hinduism, you have to travel back over 3,000 years, all the way to the Indus Valley Civilization.

The fourth most commonly observed of the world’s religions is in many ways an oddity. Many Westerners define Buddhists as “Buddha worshippers.” However, the Buddha taught that he was merely a human being. He asked not to be worshipped, but merely revered as a sage and a teacher. Classical Buddhism lacks a concept of god, of ritual, and of a metaphysical realm, which makes people question whether it is a religion or a philosophy. What Buddhism does have is a set of behavior guidelines for its adherents that can offer a lot of peace after the rush of demands. Perhaps it is not surprising after all that this religion is as popular as it is.

Despite its humble origins as the belief system of a small, nomadic tribe, Judaism is arguably the most influential religion in world history. While less than one percent of the earth’s population is Jewish, roughly half of the people in the world practice a religion that is based upon the Jewish monotheism founded by Abraham and Moses. Discover the origins of Judaism, the mark the Jewish people have made on world history, and Jewish life in the twenty-first century.

In terms of the sheer number of adherents, Christianity is the largest of the world’s religions. Between one-quarter and one-third of the world’s people profess to be Christian. If you live in North America, you are undoubtedly familiar with many Christian beliefs and customs, whether or not you are a practicing Christian yourself. Discover the origins of Christianity and how the Christian faith spread throughout the globe, dividing and changing according to the different contexts it met.

Despite its historical (and in many ways theological) connection to Christianity and Judaism, Islam is too often linked with associations of war, terrorism, and female oppression. A more thorough understanding of the world’s second most widely followed religion may help give better context and background to what is portrayed more frequently by the media.

The ancient philosopher Kung Fu-tzu (better known as Confucius) had the greatest influence on Chinese culture of any one individual. The culture, rituals, social structure, and government of the world’s largest civilization are largely based on his teachings and writings. Discover the imprint Confucianism has had on history.

Shinto, the indigenous belief system of Japan, descends from a collection of beliefs and practices that date back to prehistoric times. Over the years, a number of global religious movements, most notably Buddhism, have made their way to Japan. To a large extent, Shinto has endured alongside these additional religions. Learn more about the practice of Shinto and how Shinto has shaped the culture of Japan.

In an earlier unit, we learned how Chinese culture has been shaped through the centuries by the structure, regulations, and respect for authority that comes from Confucian thought. Taoism, with its reverence of nature, acceptance, and complacency (while discouraging power and ambition), is in many ways a stark contrast to Confucianism, however it has also had a significant influence on China’s culture and traditions.

Unit 10: Religion in the Twenty-First Century

The modern world is a rapidly changing place, and this can be particularly disconcerting in the field of religion. Technological advances make our lives more convenient, but they also make many of our customs and practices obsolete. Modern science has challenged many long-held religious convictions. Rapid transportation and communication has made the world smaller—and made interactions with individuals whose beliefs are markedly different from our own almost inevitable. What do these changes mean to the practice of religion in the twenty-first century?