History of the Holocaust 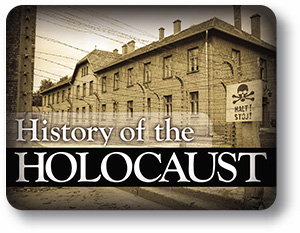 History of the Holocaust

Holocaust education requires a comprehensive study of not only times, dates, and places, but also the motivation and ideology that allowed these events. In this course, students will study the history of anti-Semitism; the rise of the Nazi party; and the Holocaust, from its beginnings through liberation and the aftermath of the tragedy. The study of the Holocaust is a multi-disciplinary one, integrating world history, geography, American history, and civics. Through this in-depth, semester-long study of the Holocaust, high school students will gain an understanding of the ramifications of prejudice and indifference, the potential for government-supported terror, and they will get glimpses of kindness and humanity in the worst of times.

Unit 1: The Rise of Anti-Semitism

The Holocaust, the state-sponsored, intentional, and systemic extermination of the Jewish people of Europe, has its roots in earlier traditions of anti-Semitism. From the early Christian church to the anti-Semitism of social Darwinism in the late 19th century, the widespread prejudice against the Jews enabled Adolf Hitler and the Nazi party to enact broad-ranging legislation against Jews and other non-Aryan peoples in Germany. After several years of progressive legal restrictions, the Nazi party began to sanction more violent means of eliminating the Jews and implemented forced emigration policies. Eventually, discrimination and planned expulsion led to the extermination camps and Hitler’s final solution, the Holocaust.

Unit 2: Preparing for the “Final Solution”: The Ghettos and the Invasion of the Soviet Union

Between 1939 and 1941, the Nazi party gained control of a large portion of Eastern Europe. German military forces, the SS, and compliant local authorities implemented a variety of provisional solutions to deal with unwanted populations in these regions, particularly Jews, the aim of which was the eventual elimination of Jews from Europe, particularly Western Europe. In Poland, ghettos confined, controlled, and decimated the Jewish population, while in Lithuania and the Soviet Union, killing squads exterminated entire populations in some regions. The infrastructure, including transit and holding centers created between 1939 and 1941, helped to support the eventual creation and implementation of large-scale extermination camps.

Unit 4: The Wannsee Conference and the Final Solution

While the early years of the Third Reich and World War II were difficult ones, particularly for the Jews of Europe, these years paled in comparison to 1941 to 1944. Between 1941 and 1944, the German government implemented the Final Solution, or the plan to kill all of the 11 million Jews residing throughout Europe and the territories of the former Soviet Union. The Final Solution required facilities, transportation, and bureaucracies to manage this horrific task, but the motivations and origins of the Final Solution remain a subject for some scholarly debate.

The extermination camps of the Third Reich were designed to quickly and efficiently kill huge numbers of men, women, and children. This was, fundamentally, the sole purpose of the death camps, even those with attached or affiliated labor camps. The majority of people deported to the death camps did not survive to tell their stories. In most cases, they were dead within just hours of their arrival—gassed in the gas chambers, their bodies destroyed in the crematoria of the camp. The stories of camp survivors provide one of the most valuable records of transport, selection, and life in these camps. There were few survivors from Treblinka II, Belzec, and Sobibor; however, a larger number of people survived Auschwitz and have shared the horror of their stories, offering both their loss and experiences to help others understand the horror of the Holocaust, or Shoah, in Hebrew.

As Allied forces, including the Soviets, British, and Americans, pressed forward and an Allied victory became clear, the Nazi administration continued its attempts to destroy the Jews and to reduce the evidence of their own atrocities. These attempts—from the forced death marches westward, to the bombings of gas chambers and crematoria and burning of written records—were unsuccessful. Allied forces overran camps in the east and west, revealing the true scope of the horrors of the Holocaust and freeing those still alive. Camp survivors were sick and starving, and relief efforts—from immediate medical care and treatment for malnutrition to long-term displaced persons camps and emigration policies—were immediately essential.

Unit 7: The Forgotten: Non-Jewish Victims and the Holocaust

While the Jewish peoples of Europe bore the heaviest losses during the Holocaust, they were far from the only victims of the horrific Nazi regime. The disabled, both physically and mentally, were among the first targeted by the Third Reich, even before anti-Semitism led to action against the Jews. Racial motivations did not impact only the Jews but also the Roma and Poles. Political enemies of the Nazi party, including Communists, trade unionists, and even religious figures willing to speak against the Nazis were also persecuted. Large numbers of people were imprisoned under various laws and statutes. These laws were used to imprison gay men, the homeless, and the underemployed. Many Soviet prisoners of war were killed in the concentration camps of the Third Reich.

Even before the end of World War II, the Allied powers, including the United States, Soviet Union, Great Britain, and France, began to formulate a plan to try and convict Nazi criminals of war crimes. This plan required the creation of new legal bodies and laws, intended specifically to prosecute the officials of the Third Reich, as well as those personally involved in the Holocaust. While many war criminals were captured or surrendered, others escaped and were captured and tried later. The war crimes trials, including the Nuremberg Trials, set a lasting legal precedent.

Unit 9: Coping in the Aftermath of the Holocaust

While the victims of the Holocaust physically rebuilt their lives and the world moved on following the Nuremberg Trials, both those personally impacted by the Holocaust and the international community were permanently changed by the experience. For the survivors, continuing their lives was not only a physical journey, but a challenging psychological one. Internationally, the United Nations built new guidelines condemning genocide and creating, for the first time, the very notion of basic human rights on a defined, international level. While most people, both in the general population and the scholarly community, acknowledge the facts of the Holocaust—particularly after the films, eyewitness accounts, and evidence presented in Nuremberg—a few survive, particularly in racist groups, who challenge these facts and continue to celebrate the mission of the Nazi party.

In 1948, when the United Nations passed the Genocide Convention, it was widely hoped that the world would never again witness genocide and that these laws would never be called upon to protect the innocent. Recognition of pre-World War II genocides remains a challenging issue on an international level, and unfortunately, there have been several significant genocides during the years since the end of World War II, ranging from Cambodia to Darfur. The tools available to the international community and the United Nations have been used in an attempt to prevent and stop genocide, but without the hoped-for effectiveness; however, there is now an active interest in the prevention of and study of genocide. In the words of Dr. Linda Woolf of Webster University, “Mass violence, torture, violations of fundamental human rights, and the mistreatment of human beings is not a new aspect of humanity; documentation of such events spans the historical record. It is imperative that a greater understanding of the psychological, cultural, political, and societal roots of human cruelty, mass violence, and genocide be developed.” Only through such an understanding can further atrocities be stopped.