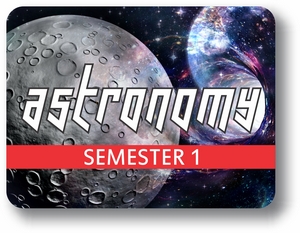 Follow your enthusiasm for space by introducing yourself to the study of astronomy. This course will include topics such as astronomy’s history and development, basic scientific laws of motion and gravity, the concepts of modern astronomy, and the methods used by astronomers to learn more about the universe. Further knowledge is gained through the study of galaxies, stars, and the origin of the universe.

We will take a journey through space and time from the beginning to the end of the universe. Can you think of anything larger or more expansive than the universe? How was the universe created? How is the universe changing? What exactly is our universe made from? These are all questions that scientists have been trying to answer since the idea of a universe was formed in the minds of our earliest cosmologists. Astronomers and other scientists have since accumulated a great deal of knowledge about what has happened—and what is currently happening—since the inception of the universe.

Unit 2: Techniques and Tools of the Trade: Studying the Universe

At one point or another, you have probably looked up at the sky at night and thought about how big the universe really is. At times, space can appear like an empty vacuum, and other times, we realize that the universe is filled with such a wide variety of materials, substances, and celestial bodies that it seems more than overwhelming. Scientists have been studying the universe for thousands of years in various ways using many different processes and tools. Today, astronomers follow the scientific method and utilize several types of astronomical tools including binoculars, telescopes, and even software that can replicate the night sky! How will you apply these techniques and tools to study our universe?

Day turns into night, and summer turns into fall. Why do we experience these predictable changes on Earth? In this unit, we will explore the systems and interactions between the sun, Earth, and moon. You will learn how the Earth’s motion in space causes us to experience days, nights, and seasons in a cyclic pattern. We will discuss the properties of gravity and how gravity affects the relationships between orbiting bodies in space. You will discover how solar and lunar eclipses occur and examine the characteristics, origin, and phases of the moon.

What are stars? Where did they come from? Will stars evolve with time? In this unit you will discover the secrets behind the stars in our night sky. We will solve the mystery behind why and how stars shine. We will explore the characteristics and composition of stars. You will learn how astronomers classify types of stars using the H-R diagram and how stars are identified within the celestial sphere. Finally, we will examine the evolution, or life cycle, of a star from conception to death.

Galaxies are beautiful, majestic, and mysterious places within our universe. Our home in the Milky Way galaxy is a galactic suburb, far from other galaxies. Our Sun is just one of approximately 500 billion stars in our galaxy, meaning that there could possibly be up to 500 billion solar systems, maybe like our own, in the universe. In addition, the Milky Way galaxy is only one of the 50 billion to one trillion galaxies that are thought to exist in our observable universe. Compared with the whole universe, our home, Earth, is like a speck of sand in the largest desert imaginable.

In this unit, we will examine and describe the evolution, organization, distribution, and differences among types of galaxies. You will be able to characterize the movement of galaxies within the universe and describe the properties of our own galaxy, the Milky Way. Finally, we will discover the incredibly mysterious and dark forces that shift and shape galaxies.

You have just traveled through the universe, exploring the different galaxies that make up outer space. Now, it’s time to return to our own galaxy: the Milky Way. The Milky Way galaxy is what houses the solar system within which our planet Earth resides. Just how old is the Milky Way? And what kind of tools do scientists use to understand our galaxy? It’s time to drive a little deeper into our home galaxy of the Milky Way.

Possibly no celestial object has captured the attention and imagination of scientists and lay people the way black holes have. Even before they were officially “discovered,” people noticed areas of darkness in the night sky. Now that we know more about black holes, it seems the questions just keep coming. Their power and force are only beginning to be understood by scientists.

Now that we’ve discussed what the universe is, how it is studied, and where we fit in, you may be eager to explore ways that you can continue learning even more about space! In this unit we’ll explore careers in astronomy from astronauts who literally travel through the stars to the crew that supports them on the ground—and much more. Whether you have more technical and mathematical skills, love writing and communication, or want to “stay in school” forever, there is likely a career for you in the aerospace industry.