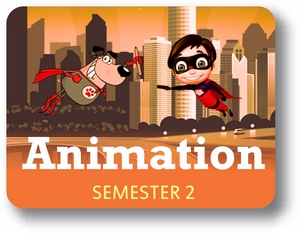 Are you inherently creative? Do you have an eye for drawing, technology, and timing? If so, 2D Animation is the course for you! 2D animation creates movement in a two-dimensional artistic space. And in this course, you will learn the necessary skills to do just that. 2D Animation will give you the tools to conceptualize and bring your animation dreams to life! Using a variety of software and design programs, you’ll have the power to transform your creative notions into reality! Design, define, and complete a variety of digital design projects including creating your own website! Learning about 2D Animation could lead to a thriving career in the growing world of technology and animation!

The following program will need to be downloaded for use during the course:

The following free, cross-platform programs will need to be downloaded for use during the course (programs will run on Windows Vista and above, Mac OSX 10.6 and above, or Linux):

Have you ever watched a modern animated movie and wondered how they created those incredibly detailed and compelling characters and worlds? With extremely realistic lighting, physics, and even hair, fur, and skin, the world of 3D animation has become truly rich and visually compelling. In this unit, we will learn about the popular, open source, yet powerful, 3D modeling and animation software called Blender.

Have you ever watched an extremely vivid, polished animated movies or 3D video games and wondered to yourself: How do they create those 3D characters? We’re going to begin by exploring the basic tools and techniques involved in creating the 3D models for characters, and then you’ll even get to create a 3D character model of your own!

At some point, you have probably watched a modern animated movie like Ice Age or Shrek, or played a modern, high-end computer game and asked yourself: How did they make those characters move so realistically, and believably? Well…you’re about to find out! Get ready to take a look at the basic process involved in rigging, skinning, and animating a 3D character.

Want to go to the movies? Well, why do people go? Because of the story! It draws them in, makes them care about the characters, and it lets them immerse themselves in another world. Storytelling is as old as the cavemen, and it is the best way to entertain modern humans as well. How do you make sure your story will captivate the audience? We have the secrets and the tricks right here—come along and we will tell you a story about telling a story!

Silent films were great when they first came out, but now that we can have music, sound, and talking in our films… let’s do it! From recording voice acting to making your own sound effects, putting sound to animation is an exercise in imagination and precision. After all, you don’t want that “pop!” to be heard before the popcorn actually starts to pop or the “crash” to occur before the block tower comes toppling over. Funny, quirky, spooky, or serious—the sounds included in your animation and how you make them are really all up to you!

Animation is fun stuff! Who wouldn’t want to spend their days making amusing characters do silly things to entertain the masses? Well, perhaps you have a more serious side and would like to apply your talents to medicine or engineering. That is possible for animators too! Whatever your dream, today is the first day on the path to a lifetime of fulfilling work as an animator. Seize the day!