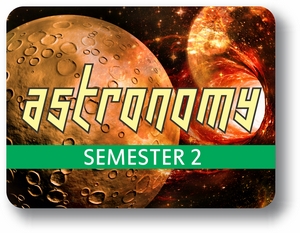 Building upon the prior prerequisite course, dive deeper into the universe and develop a lifelong passion for space exploration and investigation. Become familiar with the inner and outer planets of the solar system as well as the sun, comets, asteroids, and meteors. Additional topics include space travel and settlements as well as the formation of planets.

Ancient civilizations the world over all developed methods of observing and tracking the heavens above. Some of these techniques the cultures shared in common, and some are unique to different parts of the world. But they all form the fabric of the history of astronomy and paved the way for some of the most technologically advanced scientific feats known to mankind: space missions! In this unit, we will travel from ancient China to ancient Egypt, Europe, and the Americas tracing the astronomical contributions of various civilizations before we arrive to consider our own civilization—and some of the most significant space missions to date.

The inner planets of our solar system are more closely related than the outer planets of the solar system. These planets are sometimes referred to as terrestrial planets and include Mercury, Venus, Earth, and Mars. Although all of these planets are notably rocky and dense, each one is unique. In this unit, we will examine the formation of our solar system, describe the unique features of the four inner planets, Mercury, Venus, Earth, and Mars, and compare and contrast their characteristics. Finally, you will discover the special attributes that make life on Earth possible.

In this unit, we will examine the first two of our outer planets: Jupiter and Saturn. We’ll learn more about their structure, motion, atmosphere, and moons. We’ll examine what space expeditions, observations, and mathematical predictions are telling us about these planets and their roles in our solar system.

It’s time to journey to the last two outer planets: Uranus and Neptune, and learn more about the dwarf planet Pluto. If you grew up learning that Pluto was actually a planet, you are not alone! As we journey to the outer edges of the solar system, we will examine the controversy over Pluto’s reclassification as a dwarf planet from its former classification as our solar system’s ninth planet.

The Sun plays one of the most important roles in our solar system and certainly in life on Earth. In this unit, we will learn more about this closest star to Earth. We’ll discuss the structure and composition of the Sun, including the different layers of the Sun’s atmosphere. We’ll also learn how the Sun creates energy through nuclear fusion and the process by which this takes place. Finally, we’ll learn more about solar weather and the events that take place in and around the Sun, including sunspots, solar flares, and coronal mass ejections.

In this unit, we will examine comets, asteroids, and meteors. Although smaller than the Sun, Moon, and planets, these celestial bodies are an important part of our solar system. They can also produce dramatic visions in the Earth’s skies and have the potential to collide with the Earth. We’ll consider their composition, structure, and function in our solar system.

Unit 7: Living and Working in Space

With space as vast as it is, it seems wrong that we are confined to just one planet. Sending equipment and satellites out into space is one thing, but sending people out into space is a whole other thing. What is it like to leave Earth? How do you brush your teeth in space? What will future space exploration look like? Let’s prepare for this information in 20 seconds and counting….T-15 seconds, guidance is internal … 12, 11, 10, 9 … ignition sequence start …6, 5, 4, 3, 2, 1, 0 … all engines running … Houston; we have liftoff!

Unit 8: The Future of Space Travel

With all that we’ve learned about space explorations of the past—it’s now time to look forward into the future. At the rate at which technology accelerates, we can really only begin to guess what the future of space exploration looks like, but we do know a few projects that are currently in the works, including a manned mission to Mars! Who knows, in a few years we might even be able to take a vacation through the stars!